Dream Keeping: What To Do When Your Man Is Afraid He Can’t Do It or That He Doesn’t Matter

by Ramona Zabriskie | Mar 31, 2017 | Helping Him Find a Dream, Inspiring Him, Maintaining Your Vision, Surviving the Tough Times, Uncovering the Reasons 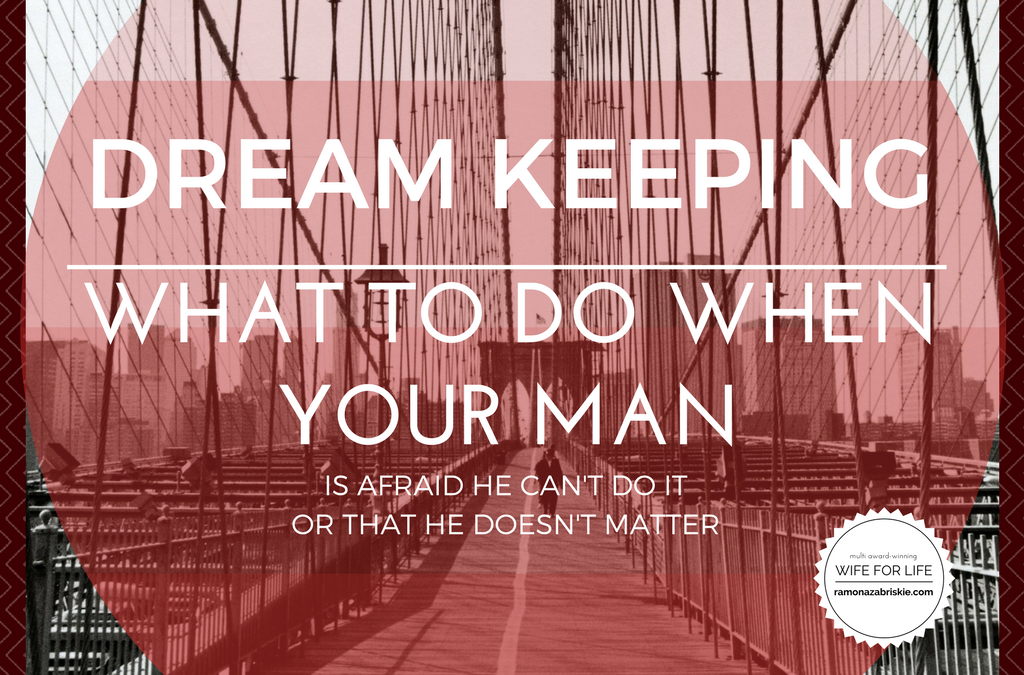 When Washington Roebling, builder of New York’s Brooklyn Bridge, became permanently disabled in the execution of his dangerous duties in 18__, his wife, Emily refused to give up on the project. She assumed several important roles: constant companion, nurse, private secretary, emissary, and unofficial aide-de-camp. When the bridge was finished nearly ten years later, Washington honored Emily with these words: “At first I thought I would succumb, but I had a strong tower to lean upon, my wife, a woman of infinite tact and wisest counsel” (The Great Bridge, p. 452).

How wonderful for a bridge builder to talk about his wife as a “strong tower,” because the towers on either side of a bridge are exactly what supports the superstructure. When completed, the towers of the Brooklyn Bridge stood 278 feet above the East River and rested upon 3,000-ton caissons—a foundation that has lasted about 130 years to date.

Because your man’s confidence will fluctuate for the rest of his life, you may, like Emily Roebling, have to step up repeatedly to help him battle his fear of failure. Peaks and valleys will test the strength of his convictions. Contests between heart and fate will challenge his masculinity. The world will throw down the gauntlet again and again as if to say, Come on then, let’s see what you’re made of. But it’s not always what he’s made of—it’s often what you’re made of. As a former student of mine wrote to his wife in the dedication of his Ph.D. thesis: “To my wife, Kira, thanks for your love, understanding, and support through these years, and for keeping me going the many times I was close to giving up.”

When a man’s life’s dream or work (his quest) is in question or jeopardy, a wife becomes an indispensable asset to the twosome when she uses her power to dispel doubt. Singlehandedly, she can often reignite his fire just by adding a little fresh kindling. As the flame spurts to life and gains momentum, she can judiciously add more fuel until she’s got her man roaring again. Here’s the process of reigniting that I’ve taught hundreds of students and have used myself over and over throughout a nearly 40-year marriage.

If your man’s afraid that he doesn’t matter or that he can’t do it, instead of becoming a fear monger yourself, think of the crisis as a prime opportunity to strengthen your position and your relationship. Respond to him with Emily Roebling’s brand of “infinite tact”, and you will become the strongest, most powerful partner in the world: the Keeper of his Dreams.

He’s Very Afraid: The Four Things That Scare Your Man the Most Vision, Grit, and Love: What It Takes to Become a Dream Keeper
The Example of Russell and Dantzel Nelson

Ramona Zabriskie, a wife of 41 years, is the multi-award winning author of Wife for Life: The Power to Succeed in Marriage and the celebrated marriage mentor and global educator of the 5-star WifeSavers Podcast, the WifeSavers Education Membership, and the acclaimed one-of-a-kind virtual school for women, Wife for Life University. Turn your marriage around in a thrilling way with her new free ebook, 5 Lies We Tell Brides and 5 Truths That Save Wives.
Share50
Tweet
Pin7
57 Shares