Vision, Grit, and Love: A Story of Dream Keepers, Russell and Dantzel Nelson 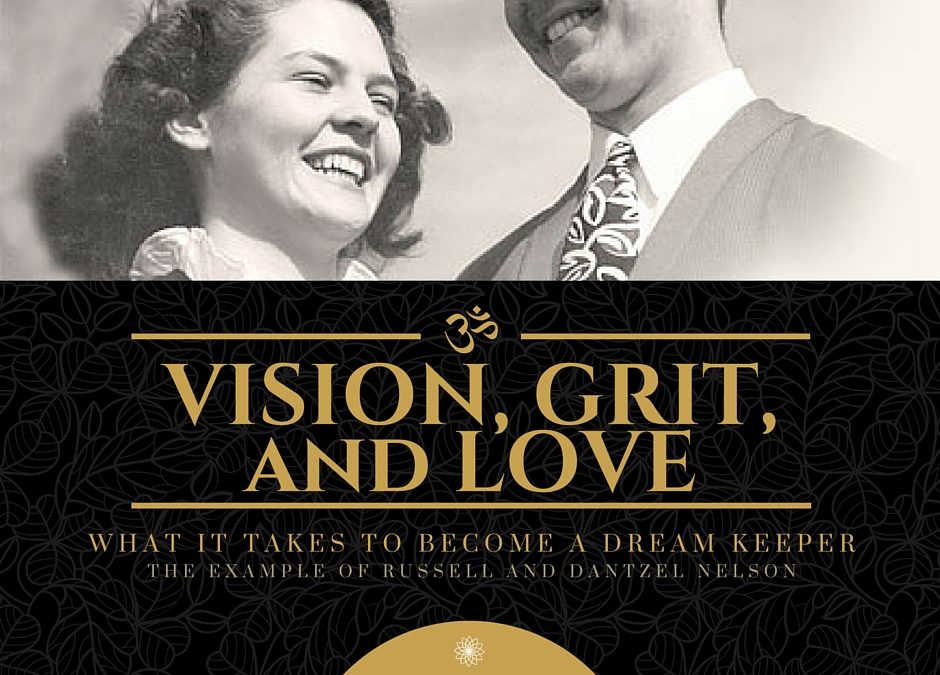 As my readers and students well know, I love collecting examples of Grand Marriage: romances that are, or will be, remembered and influential for good, for generations.

Some of my personal favorites include the husband-wife teams of John and Abigail Adams, Pierre and Marie Curie, Woodrow and Ellen Wilson, and Frank and Lillian Gilbreth among others. I thank God daily for these irreplaceable partnerships because I am a direct beneficiary of their devotion to one another and to the dreams they shared. In a more contemporary vein, my favorites include Paul and Julia Child and Ronald and Nancy Reagan, but that’s just the tip of the iceberg. Grand marriage, as impressive as it may sound, is not as rare as you might think. Keep your heart and eyes open, and you will start to see it everywhere: from the annals of history to today’s news to your own relatives, neighbors, and friends.

One indicator to look for in a Grand Marriage (see Wife for Life: The Power to Succeed in Marriage for the many others) is a wife who is cognizant of her power to inspire her husband’s drive to achieve, as well as to protect him from his fear of failure; this is a woman who has the wherewithal to stand strong in her man’s weakest moments, to hold him tight as if she’s the proverbial last knot in his fraying rope.

I call her a “Dream Keeper”.

One such woman is Dantzel Nelson. She and her husband, Russell are the most recent additions to my Grand Marriages collection because together (it was only possible together) they managed to pursue and achieve his pioneering quest in cardiothoracic surgery over many decades. The surgeon’s internationally renowned successes of course, also include stories of fear, failure, sacrifice, and salvation. Here, in his own words, is one of those pivotal moments; a test of faith that would not have been passed without a Dream Keeper at his side…

Fifty-eight years ago I was asked to operate upon a little girl, gravely ill from congenital heart disease. Her older brother had previously died of a similar condition. Her parents pleaded for help. I was not optimistic about the outcome but vowed to do all in my power to save her life. Despite my best efforts, the child died. Later, the same parents brought another daughter to me, then just 16 months old, also born with a malformed heart. Again, at their request, I performed an operation. This child also died. This third heartbreaking loss in one family literally undid me.

I went home grief stricken. I threw myself upon our living room floor and cried all night long. Dantzel stayed by my side, listening as I repeatedly declared that I would never perform another heart operation. Then, around 5:00 in the morning, Dantzel looked at me and lovingly asked, “Are you finished crying? Then get dressed. Go back to the lab. Go to work! You need to learn more. If you quit now, others will have to painfully learn what you already know.”

Dr. Nelson freely acknowledges that he would never have returned to the operating table and ultimately saved the lives of untold numbers, including some very important people, if it weren’t for, as he puts it, his wife’s “vision, grit, and love!”

Now the reason I collect and share stories like this is not only to inspire myself, but to inspire wives everywhere to become Dream Keepers like Dantzel. There is much involved, admittedly, to becoming a Dream Keeper, a lifetime pursuit, and I would love the opportunity to teach you the whole of it, but for right now, within the confines of a blog post, let me warn you of this much:

Chances are this was not the first time Dantzel had bolstered her husband in a crisis. Her husband was not, as I am sure yours is not, a one-time fixer-upper. Because a man’s confidence fluctuates throughout his life, his wife, his Dream Keeper, will repeatedly have to suit up and do battle with her man’s fears. Peaks and valleys will test the strength of his convictions. Contests between heart and fate will challenge his masculinity. The world will throw down the gauntlet again and again as if to say, Come on then, let’s see what you’re made of.

But if Dantzel and Abigail and Ellen and Lilian and Julia and Marie and Nancy and hundreds of other Dream Makers teach us anything, it is this surprising, almost counterintuitive, lesson:

Though the world may want to know what he’s made of, it’s not always about that.  More often — in truth, in actuality — it’s what you’re made of; and what you are “made of” had better be more than sugar and snails and puppy-dog tails; it had better include the stuff of a Dantzel Nelson: Vision, Grit, and Love.

Leave a comment on this post to be entered to win! All thoughtful commenters on this blog between now and 11:59m PST on the last day of the month, will be entered in a RANDOM.ORG drawing for a Date Night Giveaway (movie and a treat!). Each new comment each month (one per post please) will count as an entry. Come back and comment on multiple January 2018 posts to better your chances!

Ramona Zabriskie, a wife of 41 years, is the multi-award winning author of Wife for Life: The Power to Succeed in Marriage and the celebrated marriage mentor and global educator of the 5-star WifeSavers Podcast, the WifeSavers Education Membership, and the acclaimed one-of-a-kind virtual school for women, Wife for Life University. Turn your marriage around in a thrilling way with her new free ebook, 5 Lies We Tell Brides and 5 Truths That Save Wives.
Share161
Tweet
Pin2
163 Shares