What Does Rosemary Clooney Learn About Men in “White Christmas”?

by Ramona Zabriskie | Dec 11, 2018 | Building a Friendship, Building a Partnership, Building a Relationship, Generating Real Intimacy, Helping Him Open Up, Increasing Unity, Inspiring Him, Keeping the Magic, Living With a Man, Uncovering the Reasons, Understanding Men 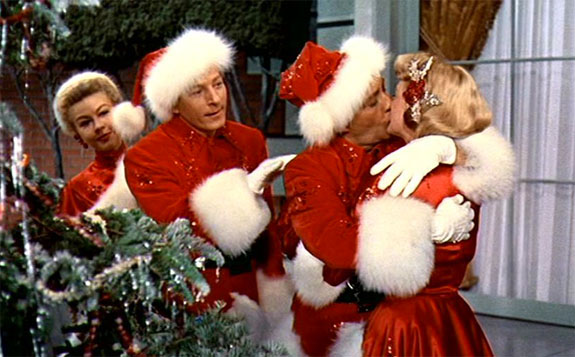 I love this interchange between Danny Kaye (Phil) and dance/producing partner, Bing Crosby (Bob) in the holiday classic, White Christmas:

These guys are not talking about what I’m going to talk about, but it’s an apt description of something no one really talks about:

What feeling admired by your wife, feels like to a man.

Now, when I say “no one” really talks about it, what I mean is, men don’t talk about it – certainly not between themselves and not even to their wives. If a guy was forced to articulate how important feeling admired is to him, or if he had to ask for it to get it… well, the “boing” in the “wow” would lean more toward “ouch”. So, I’ll spare him the pain and do my best to explain….

When a man believes that his wife not only accepts and approves of him (as in his accomplishments, his personal strengths and talents, his masculinity), but that she actually, sincerely takes pleasure in those things about him…well, that’s the WOW we’re trying to describe. I know from my own experience, as well as the experience of the men and women I’ve loved and worked with, that feeling admired gives a husband the highest high a man can feel in relation to his wife. His-heart bonds to her-heart like super glue, especially when he feels sure that her admiration implies her whole-hearted partnership…

Betty: “I guess I’ve always been a silly school girl, you know the bit, the lady fair and the knight on the white horse.”
Bob: “Let me tell you something, it’s kinda dangerous putting those knights up on white horses. Likely to slip off you know.”
Betty: “I think mine’s there to stay.”
Bob: “That’s sure good to know. Makes a fella feels a little shaky though, up there all alone on one of those bleached charges.”

The relationship between Bob (Bing Crosby) and Betty (Rosemary Clooney) in White Christmas is a fun example of this dynamic between a man and a woman in love. Here’s my one run-on sentence synopsis of the course of their romance (intake of breath):

The two performers have a lot in common and a good thing going — falling in love despite the fact that both have been historically reticent to settle down with anyone — but of course, this is the movies, and a situation arises that causes Betty to feel like her white knight has slipped from his horse; a misunderstanding, a mix-up, which wounds Bob to the core, but when finally resolved, actually elevates Bob in Betty’s eyes, for he has gone to extraordinary trouble and huge personal expense to bring together the men from his World War II division to surprise their former commander, the downtrodden General Waverly; so with a new heart, she rejoins Bob and the cast for their big Christmas Eve extravaganza tribute to the General, and in a poignant expression of her genuine admiration for Bob, Betty presents him with a toy white knight sitting securely atop his tall, white steed.

Sorry for the spoiler, but there can’t be too many of you surprised by that happy ending (even if you haven’t seen the film). And there can’t be much doubt that Betty becomes Bob’s wife, cherished by him for many reasons: her blue eyes for one thing :), and for, of course, the way she purposefully and frequently inspires him with the message: You amaze and thrill me.

Other posts in the Classic Hollywood Christmas series:

Would “Life” Have Been So “Wonderful” for George Without Mary?
Can Enemies Become Lovers? The Secret is in “The Shop Around the Corner”
It’s a Miracle: The Way Transforms Doris Can Transform Your Marriage

Leave a comment on this post to be entered in The Fourth Annual Wife for Life Classic Hollywood Christmas Giveaway! All thoughtful commenters on this blog between now and 11:59m PST December 31st, 2018, will be entered in a RANDOM.ORG drawing for one of FOUR Hollywood Christmas classics on DVD (including It’s a Wonderful Life) as well as an autographed copy of Wife for Life: The Power to Succeed in Marriage. Each comment (one per post please) will count as an entry. Come back and comment on all the Hollywood Christmas Classics blog posts (published Wednesdays in December) to better your chances!

Ramona Zabriskie, a wife of 41 years, is the multi-award winning author of Wife for Life: The Power to Succeed in Marriage and the celebrated marriage mentor and global educator of the 5-star WifeSavers Podcast, the WifeSavers Education Membership, and the acclaimed one-of-a-kind virtual school for women, Wife for Life University. Turn your marriage around in a thrilling way with her new free ebook, 5 Lies We Tell Brides and 5 Truths That Save Wives.
Share91
Tweet
Pin3
94 Shares