A Warning to Wives: The Ten Steps to Divorce You Don’t Even Know You’re Taking 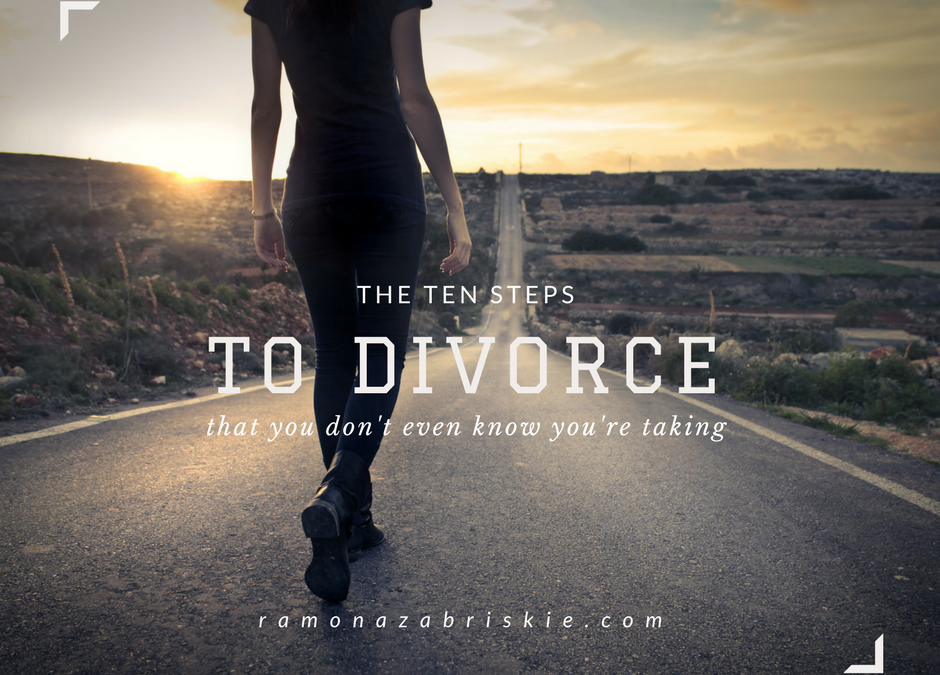 On our first night in Honolulu (we’d been married five years), we had dinner at an outdoor table at a Waikiki Beach restaurant.

It was the beginning—and the end—of a dream come true.

The next day, a blistering tropical sun scorched us from top to bottom. Alarmed, we hurried to the hotel and hobbled to our sanctuary, but even the crisp bed sheets hurt. The pool, on the other hand, felt good—until we began to pucker up like sun-dried tomatoes, and chlorine infected my husband’s enraged epidermis.

By sunrise, he had a rocketing fever and throbbing pain inside both ears. The hospital emergency room confirmed our own diagnosis: infection caused by entrapped water. Sensitive to the touch and yowling in agony, all my beloved could do for the next several days was to take medicine every two hours and watch all-night reruns of Hawaii Five-O.

Sooner or later (and usually sooner), every marriage will feel like a Hawaiian holiday gone awry. Relationships, like travel plans, rarely go as planned. In fact, if there is one thing we can guarantee each and every bride, it’s that nothing will turn out quite the way she thinks it will. And when she discovers it, a woman may be tempted to punish her husband for the loss she feels. Dismayed and fearful as he grows ever more distant, she may complain, lash out, push too hard, or clam up, when in fact, all she really wants is love. Predictably, both husband and wife languish for want of true human understanding, and the marriage dies a slow, painful death.

An equally tragic scenario occurs when the wife keeps the disillusionment to herself, or she may send mixed messages (though clear to her) that confuse a man or don’t sink in at all. Regardless; such indirectness, silence, miscommunication, or pretense allows her partner to go on believing that all is reasonably well, setting him up for a shocking finale when she turns apathetic, distant, or disdainful.

The nuances of individual relationships vary of course, sometimes significantly, and the road too frequently taken has two sides. It’s safe to say, however, that for most women in unhappy marriages, disillusionment is a major contributor. It advances like a glacier—very slowly, very subtly, growing more intense and more immense by the year. The mass of heavy ice, carrying rock and debris from the past, gradually deforms the landscape.

If you are a woman who would rather this not happen to your marriage or suspect that it already has, then brace yourself: let’s take a candid stroll down what I call, “Dream Breaker Road”:

I try to console my students who are shaken by the realization of how far they’ve progressed toward total estrangement by admitting that I know the Road too well myself. I was on the brink of divorce many years ago when a moment of truth forced me to see things as they actually were, not as I had fantasized them to be. That distinction between truth and fiction was critical to say the least, not only because it affected my marriage, opening up the space we both needed to restart and heal, but also because it was a step forward in my own maturation.

The good news is that dead-ending on the road to alienation is not inevitable. You can hold your ground and turn around with the right education, support, and skill set. Honey and I have been back to Hawaii many times since our near-divorce days, and we always marvel at how far we’ve traveled––in the opposite direction!

An entertaining, interactive evening of fun, friendship, media, and music with Team Wife for Life

Tickets are free but must be reserved HERE: