Feeling Close to Your Husband: The Three Secrets You Need to Know 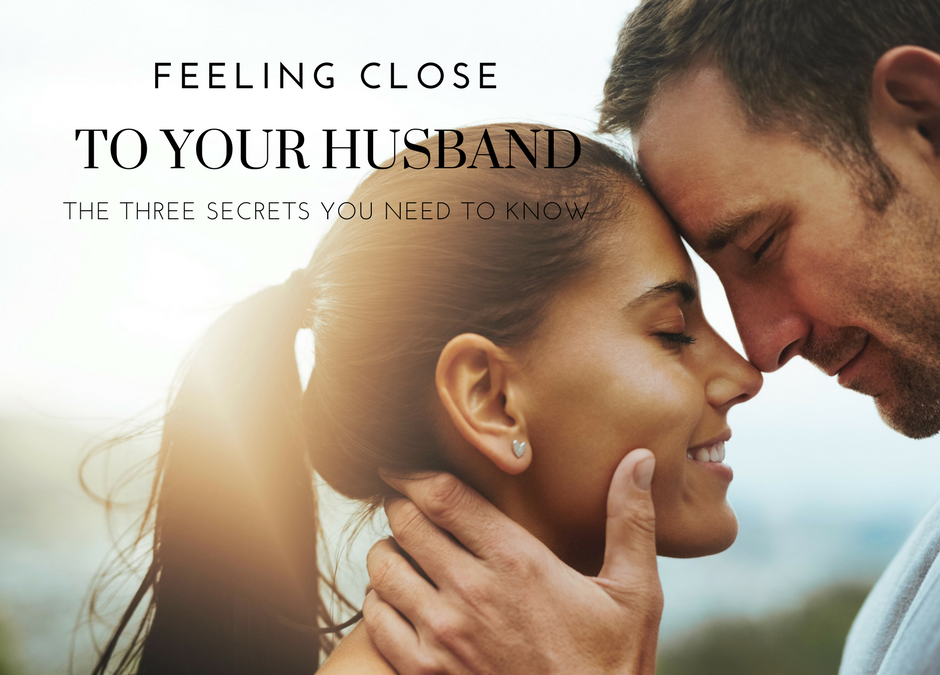 Before I can take you into the principles, strategies, and tactics that will help you feel closer to your husband, I need to be sure you understand three basic Wife for Life tenets that relate to his masculine nature. I’m going to call these tenets “secrets”. If you are a Wife for Life University student, which I highly recommend, then you will be familiar with these “secrets”, but even if they are familiar to you, they are, of course, worth reviewing because they sink in a little deeper each time.

SECRET #1:
Most men have only ONE intimate: you.

Did you know that fifty percent of husbands, on average, have no intimate—that is, someone they talk to about personal matters or confide in—other than their wives? Forty percent have one other close friend they can talk to, while only ten percent have two or more. Wow! How many intimates do you have? Many, I’m sure.

It’s not that men don’t want and need the benefits of friendship. Of course they do. In the nineteenth century, for instance, deep male bonding and mutual support—of the sort we hardly see anywhere but in the military or the locker room anymore—was the norm.

Today’s society has dramatically eroded the number of friends and confidants in a man’s life; their emotional isolation is steadily increasing. There could be a lot of reasons for this, but the men I’ve talked to say that as a younger man especially, their work, their dreams, and their primary relationship with a woman consume their time and emotional energy, but the need for real friendship still exists. Because of that, a husband naturally longs for his wife to fill that need, preferring her companionship above anyone else’s.

So there it is: our first little known or discussed fact, or secret, that as a wife you have to internalize in order to develop understanding, which, as I say, is key to honing your intuition.

It’s true. The primary focus of a friendship between two women is relational. It’s sweet. It’s simple. We value authenticity, support, and mutual understanding—in other words, connection. We love to love each other.

As I explain in more detail in my book, Wife for Life: The Power to Succeed in Marriage, and as we explore in-depth in Wife for Life University, men are, in their very essence, performance rather than relationship based. Hence, no one can truly be considered a “friend” in a man’s world, unless in the company of that “friend”, a man feels secure in his “status” —that is, respected, for who he is, and he defines who he is as what he does. Listen closely to what I’m saying; it’s very important to understand: Your man’s very identity is tied up in doing, not just in being. Therefore respect (as in being treated as an equal) for his “performance” (his work, or any other task-oriented aspect of life) translates in his mind to respect of his person. His sense of worth, or his confidence that he deserves a place in the human race, is based on external recognition—on the acknowledgement of others; most especially YOU.

Do you can see now how impossible it is for him to feel “friendly” toward someone if he feels that person does not treat him with respect? It is absolutely critical and fundamental that a wife conveys respect to her husband as consistently as possible if she wants to become his intimate.

Put a little more bluntly: You will never get close to him or draw him close to you through skepticism, cynicism, condescension, contempt, or criticism—even if you think you are being “constructive”. I know, I know…you and your girlfriends would never be so sensitive as to completely shut down or withdraw over a bit of helpful criticism or a well-meaning suggestion for improvement, but your husband is not your girlfriend. He is a man. And in man’s world, a friend is expected to be nonjudgmental, loyal, and straightforward. He longs for unconditional respect the way you long for unconditional love. And, remember, his honest desire when he married you was for you to be his lover and truest friend. He also wants to be the one friend you prize and trust the most­­—pre-eminent above all others…

SECRET #3:
Your man wants to feel that he is the center of your universe.

A good part of what made you so appealing to your guy early on was that you were so intensely focused on him. He perceived, rightly, that your world had changed its axis­—he was your new center and you were his. That’s the glory of falling in love.

In the time since then, however, I’m guessing that you’ve drifted away from center, or you feel he has, or you probably wouldn’t be reading this guide (or watching all those Hallmark movies). It’s natural to be wistful about those early days, remembering what it was like to be hyper-focused on each other, but there’s no reason to panic or to grieve too long or too loud, because there’s a good reason it was that way back then, and there’s a good reason that it’s not so much that way now.

Suffice it to say, the romance you’re remembering—the conversation, the cuddling, the eye-contact that felt more frequent, more intense, and definitely of longer duration—was all part of Mother Nature’s plan back then. It formed the backbone of what was to become a marriage. And it actually remains the backbone of your marriage—that singular focus, that pure relationship—it’s just that you both express your beautiful obsession differently now.

Periodically, I post a meme on my social sites that describes a good husband as a wife’s best and first line of defense, her greatest ally, biggest help, sweetest soother, and most reliable problem solver. That meme always gets a hoard of likes and is the most frequently repined of all our memes on Pinterest. No surprise of course, that women love it. What does surprise me though, is how men respond to it. Comments from men always say something like, “Thank you so much for posting this.” Or “Exactly!” They aren’t overwhelmed by my catalog of “expectations” of a good husband. On the contrary! The list actually describes how they want their wives to think of them!

So, before you will be able to fully embrace deeper Wife for Life principles or practices, you have to believe this principle above all others: He wants to be your ONE.

With that secret” and the two others we’ve learned, you’ve now got the basics for the understanding that, explored a bit further, can fine tune your wifely intuition, which—if you remain intentional about learning and applying key principles and skill sets—will lead to the intimacy you’re looking for with your husband!

Questions or thoughts? Comment on this post this week (Monday, March 12th at 9pm PST) and you’ll be entered to win a free copy of my popular ebook, TALK ABOUT INTIMACY: 10 Secrets to Feeling Closer to Your Husband (and Helping Him Feel Closer to You) Through Conversation, plus the Talk About Intimacy bundle: accompanying audio lessons, application exercises, and date night ideas! (It’s the first time I’ve ever held a giveaway for this bundle loaded with specific how-to’s! A Random.org drawing will be held from all thoughtful commenters on Tuesday, March 13th. 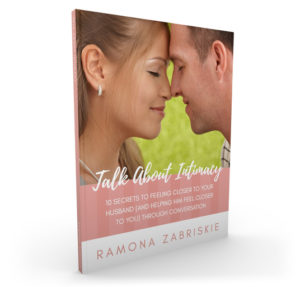 Don’t waste one more day feeling unsure, insecure, confused, or alone.
Clearly identify where your marriage is headed so you can take control of your future today!

Ramona Zabriskie, a wife of 41 years, is the multi-award winning author of Wife for Life: The Power to Succeed in Marriage and the celebrated marriage mentor and global educator of the 5-star WifeSavers Podcast, the WifeSavers Education Membership, and the acclaimed one-of-a-kind virtual school for women, Wife for Life University. Turn your marriage around in a thrilling way with her new free ebook, 5 Lies We Tell Brides and 5 Truths That Save Wives.
Share67
Tweet
Pin4
71 Shares