What’s in a Kiss? Ronald and Nancy Reagan

by Ramona Zabriskie | Mar 18, 2016 | Building a Partnership, Building a Relationship, Generating Real Intimacy, Helping Him Find a Dream, Increasing Unity, Inspiring Him, Leaving a Legacy, Maintaining Your Vision, Why Marriage 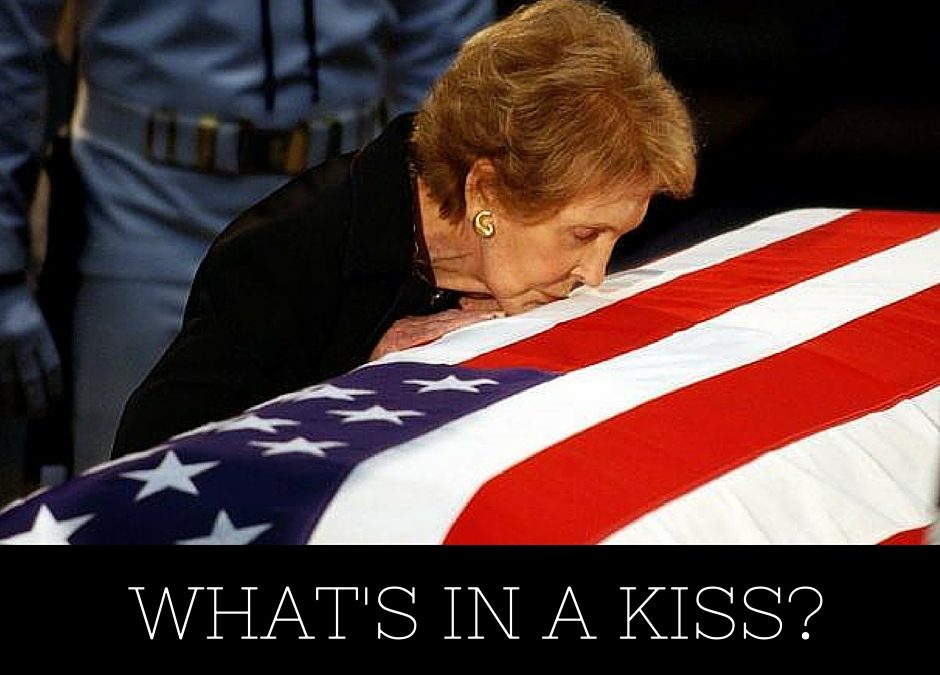 “As painful as leaving was for me, I did feel it was time. We’d had twenty years of public life, and I thought we needed to spend more time with family and friends–and with each other.”

She bent over, then caressed and kissed the casket. Shocking in its tenderness, intimidating in its intimacy, we starred at first, then dropped our eyes. I personally felt blinded by its sadness — and its glory: A man inspired. A woman cherished. A world literally transformed by romantic partnership.

“When we walked into the meeting room, Ronnie sat down in his chair, and I impulsively sat in Gorbachev’s. Ronnie looked over at me and smiled. “My, Mr. General Secretary,” he said. “You’re much prettier than I expected.”

When I think of the Reagans, (which I do nearly everyday as Nancy’s autobiography, My Turn, sits on the desk shelf just above my office computer, along with the biographies of Marie Curie, Abigail Adams, Lilian Gilbreth, Ellen Wilson, Julia Child, and at least three dozen other powerful wives), I think of decades of intense, purposeful living, loving, and growing; a visionary life that started with little vision at all; dreams embraced, dreams cast off, dreams begun and never finished. Broken dreams and dreams that took on a life of their own. Though the historian may make a concerted study of it; where those dreams came from and how they turned out doesn’t really matter as far as students of marriage are concerned. All that matters to us is comprehending how two people gradually wove all those dreams together so tight, so taut, so true, that no one, not even the dreamers themselves, are ultimately able to differentiate his from hers.

“When I married Ronnie, I thought I married an actor. But looking back now, I really should have known that acting wasn’t fulfilling enough for him. He had already served five terms as president of the Screen Actors Guild and two more as president of the Motion Picture Industry Council. And he had always been active in supporting candidates for public office. All that should have been a signal to me, but somehow I missed it.”

Twelve years later, even now, the still photo of Nancy’s farewell, a photo as historic as any in their Presidency, elicits a sense of the sacred and resurrects a hope as poignant as Ronald Reagan’s “tear down this wall”. With her kiss, that one unexpected gesture, in front of cynics and skeptics everywhere, Nancy decimated walls as thick and carefully constructed as Berlin’s; walls demeaning and damning and imprisoning a society of disbelievers; walls of fear and hurt; walls standing between ordinary us and extraordinary marriage. Lifelong marriage. Productive marriage. We all want to believe in love with a legacy.

“So he’s not the world’s best dresser, and he doesn’t appreciate fine dining. But he certainly has  a flair for romance… A reporter once told me that he and his colleagues were sometimes embarrassed to look at us, especially when I was meeting Ronnie’s plane after a trip, because instead of a peck on the cheek, we would really kiss… I loved it that he told an interviewer that coming home to me was like coming out of the cold into a warm room with a fireplace.”

“…if Nancy Davis hadn’t come along when she did, I would have lost my soul.”

Thank you Ronald and Nancy Reagan for the glimpse into what was real for you and possible for us.