What Makes This Woman a Wife for Life?

by Ramona Zabriskie | Jun 15, 2016 | Building a Partnership, Caring for Yourself, Creating Your Own Happiness, Helping Him Find a Dream, Inspiring Him, Leaving a Legacy, Living With a Man, Surviving the Tough Times, Why Marriage 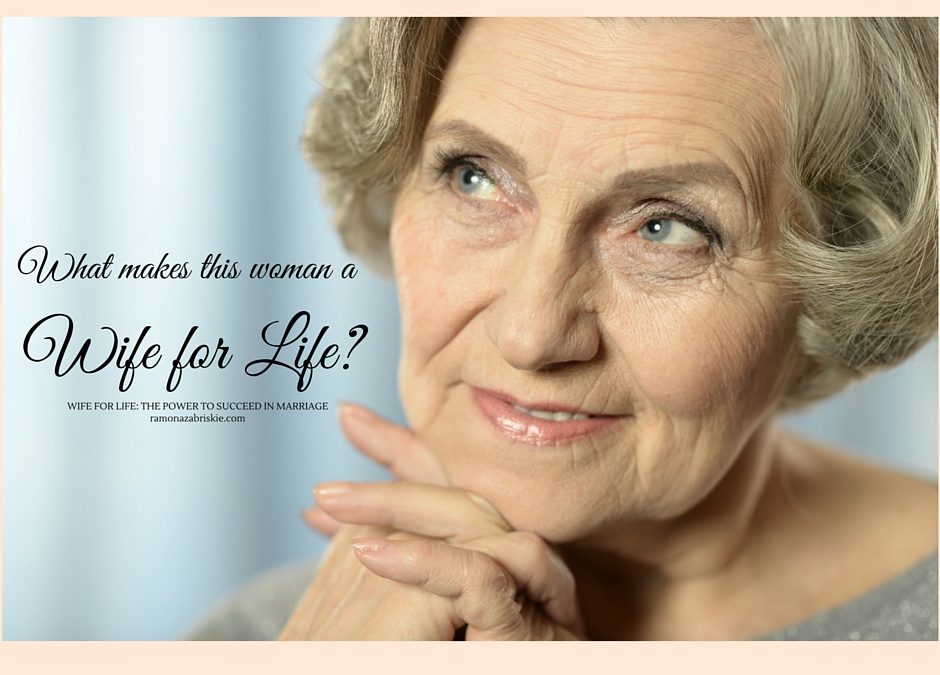 Your heart will eventually tell you what powerful wives already know: to cherish the man but not his quest is virtually impossible. Confidence in the one is faith in the other. ~ Wife for Life: The Power to Succeed in Marriage*

People ask me all the time: What is a Wife for Life? Until now, I’ve cited my favorite examples from the book. And I still will. But now, thanks to a recent business trip with Honey, I have a new favorite exemplar…

Dale dropped me off in front of the house. It scared me to death, all those icy steps to the front door, but I decided it would be scarier still standing still—in the dark, waiting for him to park the car half a mile away. Wishing I had spiked boots and a pickax instead of spiked heels and a purse, I toed-heeled it inch-by-inch to the snowy summit, pausing to catch my breath and shake my curls out before planting a flag and pushing the doorbell.

A silver voice with silver hair drew me inside by the elbow.

“Let me have your coat my dear.”

It took a long second to summon up my name; I was so overwhelmed by the social chaos in the room. Despite the din, or now that I think of it, maybe because of it, her eyes never left mine: she willed me into some other world, a place where only two people walked around the furniture instead of two-hundred. When she said to make myself at home, I realized that it was her home.

Within minutes Dale had joined me, and I tried right off the bat to tell him how impressed I was with our hostess, but it didn’t work; in the crowded cacophony, my take on the occasion would have to wait. It was all we could do to bully the buffet table and jump a claim beside the fireplace. And it was there—in front of a wall of stone, adjacent to a wall of windows, hemmed in by a wall of people—that the husband of our hostess, the Air Force Lt. General, the national cyber-security expert I’d been hearing about for so long, miraculously, graciously, found us.

He and Dale talked. I only caught every third word or so, but it was clear the men enjoyed congratulating each other on the Air Force event they had both spoken at during the week. After mutual admiration had run its course however, I expected the General—surrounded by guests enough to fill an air hanger—to excuse himself. But he didn’t. Instead, The Remarkable Man did something rather… well… out-of-the-blue remarkable. He invited us to take a self-directed tour of the house: his home. Go ahead, he said, and look upstairs and down. Check out this room, and don’t miss that room, and be sure to take in the view of Colorado Springs off the back deck.

Of course we did. And our explorations proved a hunch: none of the others had received the same invitation, or else weren’t taking advantage of it. We found ourselves alone as we strolled from room to room, like the patrons of a private art or history museum, ooing and ahhing over two magnificent views of the world: one of city lights against a back drop of black mountains, and one of a family against a back drop of forty-plus years. Both took our breath away.

Since the Air Force and the world go hand in hand, every wall, every shelf, every corner, high or low, was tastefully filled with things and art and images international; both the ordinary and the extraordinary. Collections of Russian dolls, European blue plates, walls like scrapbooks… you name it, every culture and continent represented, every stage of family life memorialized. Considering the decades of sacrifice and care that went into it’s creation, I thought it was—on the whole—exquisite.

Dale admired everything we saw as well, but was out and out enraptured by the General’s library; a room lined not only with literature, but also with trophies, awards, and framed letters and faces bearing famous signatures. It was magnificent: a man’s Quest on display… and rightfully so; such global accomplishments and national contributions deserve tribute, and what better place to pay that tribute, I thought, than in the home of the ones who earned them?

If a married man begins adulthood as a normal, well-intentioned guy, the support and enthusiasm of a Wife for Life will turn his ordinariness into greatness. Personal strife will turn into a crusade—if she believes in him. The goal is irrelevant: it might be starting a business, curing cancer, remodeling the house, or pitching a no-hitter. The point is that she believes he can do it and that he should do it. He can outrun fear, doubt, and insecurity—the demons nipping at his heels—if she sets the pace. His wife is the springboard as well as the finish line. She makes him reach. She also makes him accountable because she is the only other person in it for the long haul and the only one who cares as much as he does. She is the most intimate, immediate witness to his grinding investment, the only one who can truly appreciate the payoff because she paid too. And that’s why he needs a (committed) Wife for Life. A lot of quests can take decades to discover, achieve, and glory in. You earn that ticker-tape parade together.*

When it was time to go a couple of hours later, Dale went gallantly to fetch the car while I waited in the entry. The General’s wife found me.

“Are you going now my dear?”

“Yes, my husband’s gone for the car. We’ve had such a lovely time in your beautiful home. Thank you very much for inviting us.”

“Our pleasure, of course.”

I smiled as sincerely as I could; frustrated that our conversation was, so far, forgettable; because it suddenly became desperately important to me that she remember me; or rather, that she would know that I, another wife, another mother, another woman –though we had spoken few words—would never forget her. I decided to go for it.

“I am the author of a book and the founder of a school called Wife for Life University that teaches women how to succeed in marriage by crafting a powerful partnership with their husbands,” I said. “Touring your home tonight, full of so many beautiful things and memories, I could feel what you’ve created and its magnificent.”

The Lovely Lady was stunned. She clasped my hand, and her eyes filled with tears. “My daughters say that I need to give it all away.”

“Oh my goodness!” I cried, thinking of the million mementos that signified her life’s work. “This home and everything in it testifies to your creativity, your taste, your vision, your patience, your love!”

“My love,” she repeated in awe.

Yes, her love: love for her man, love for his work; love for her children, love for her country, and love for all the friends, family, and the ten thousand-thousand others that have been impacted—knowingly and unknowingly—by what she has given her whole heart to. Tremendous things have happened, and will continue to happen—certainly for decades, and perhaps for centuries to come, which will benefit the world—because this one woman comprehended and embraced the power in her womanhood.

The General has his library.

His Wife has her Life.

…if a woman can adore her husband with all her heart and inspire him in turn to adore her with all of his, if together they can nurture his quest and her dreams through grand and grievous days, is that not one of life’s greatest attainments?*