Our Love Will Last Forever: Jerry and Elaine Orbach

by Ramona Zabriskie | May 6, 2016 | Building a Friendship, Building a Partnership, Building a Relationship, Creating Your Own Happiness, Helping Him Find a Dream, Increasing Unity, Inspiring Him, Keeping the Magic, Leaving a Legacy, Maintaining Your Vision, Why Marriage 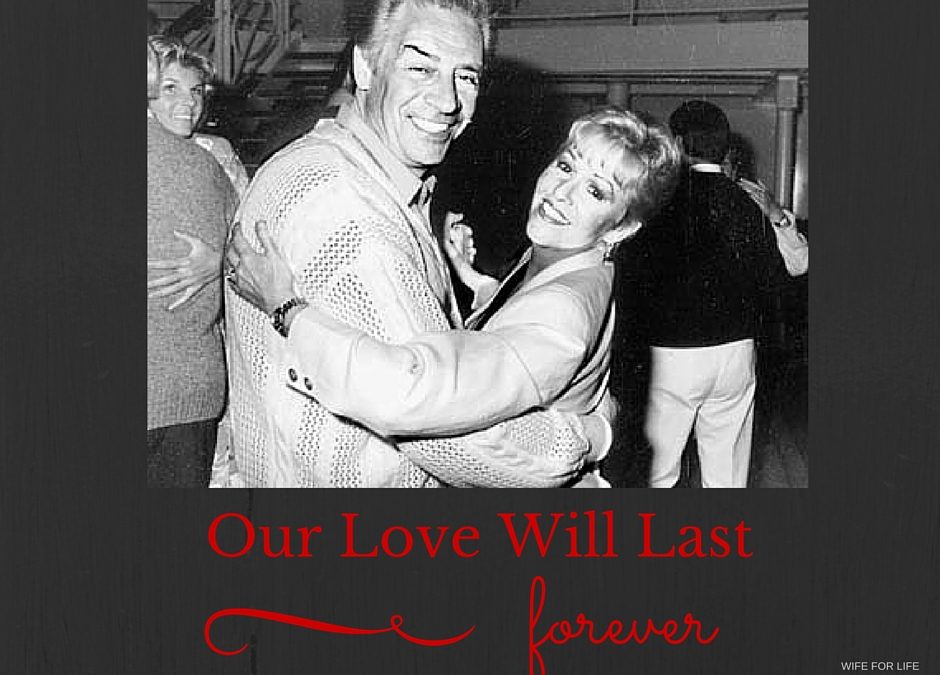 It’s FOREVER FRIDAY here at Wife for Life, and today we celebrate a celebrity couple…

When did I fall in love with you?
When I asked you to Boston?
What matters how our love began,
(I sound just like Jane Austen!)
I only knew I love you still,
and I’m not being clever,
I always have and always will
our love will last forever.
~ Jerry Orbach

Personally, I’m a Jerry Orbach fan from way back, when he originated the role of El Gello (see YouTube below) in the longest running musical of all time, the “Fantastiks”. (As a young woman I played the lead in the Fantastiks for two different companies, and my Honey played the same role as Jerry did. Ole’!) However, most people probably know Orbach better as Detective Lenny Brisco from Law & Order, and your kids probably know him better as Lumiere in Disney’s Beauty and the Beast. Those claims to fame though, are just scratching the surface. Jerry Orbach had a long and varied stage/screen career including his role in Dirty Dancing starring opposite the late Patrick Swayze and Jennifer Gray.

Behind the scenes however, the best thing about Jerry Orbach was his real life love affair with wife, Elaine. They were consumed with each other from all accounts; a grand kind of marriage that is rare in the entertainment industry. These partners cherished every minute together, building their life “as one builds a home, brick-by-brick, with each day…poetry, the mortar…” (Source: Janet Walker, Splash Magazine)

Every day, before sun-up, Jerry left Elaine a new, love-laden composition of his own making. Elaine in turn placed each of those scribbled scraps inside a tureen given to them by Broadway producer David Merrick. When Jerry passed away, Elaine gathered all the love notes from their twenty-five year marriage, and with the encouragement of theater and film historian and author, Ken Bloom, began the process of sorting and weeding until the collection of poetry took its own form as a book. It’s title? Remember How I Love You – Love Letters From An Extraordinary Marriage.”

Because of this crazy schedule I don’t often have time to think, but when I do, I think of you. I know that saying “I Love You” is an everyday thing, almost a habit, like “good morning” or “good night,” but I do love you very much, and I miss you even more. I can’t wait to see your face and kiss it! Then I’ll work my way down…Oh, never mind, that way lies madness! Anyway, it’s time for Lights, Camera & Sit Around! I hope by the time you get this yo ur back is all better, and I’ll talk to you tonight. You are the best thing that ever happened to me, and wherever you go today shopping, massage, voice lesson, etc., know that you’re on my mind and in my heart.

I Love You
Jer XXX’s

I’m as romantic a sap as Jerry, of course, so I bought Elaine’s collection of love letters a couple of years ago while visiting the Jerry Orbach Theatre in NYC,

the “Fantastiks” is SILL running after 50 years,

just like the romance of Jerry and Elaine Orbach.