Wars Over Chores? Husbands and Housework 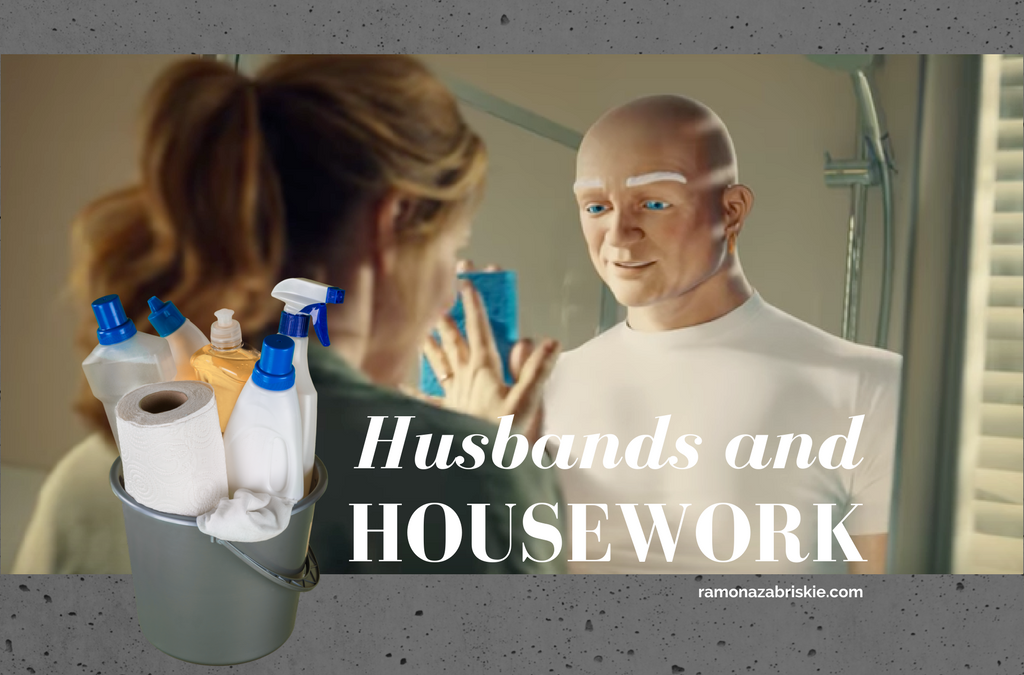 My research for Wife for Life: The Power to Succeed in Marriage included interviewing people who had been through divorce. What happened? I asked. Though there was obviously deeper issues involved, one ex-husband talked about years of counseling where a central dispute remained…. ready for this? Housework!

It may sound superficial, but according to a Wall Street Journal article, the fair division of household chores is a serious concern (if not a deal-breaker) for 57% of American couples. (“A Truce in the Chore Wars” by Ellen Byron, WSJ, Dec. 5, 2012, p. D3.) The majority of women say they want more help from their partner, which, actually, they are getting. In 2011, men reported doing 16 minutes of housework a day, up two minutes from 2003 (every minute counts), while the total minutes of housework on an average day for women, was down six minutes. (Bureau of Labor Statistics). “Wives, in theory, should rejoice,” states the article.”But after generations of grumbling about doing the lion’s share of housework, many find it hard to stop micromanaging.”

I personally can’t argue with that. In the early years, I tried like the dickens to keep my home, laundry, and husband under control, but it was an uphill battle; his standards were so different than mine right from the start. (I remember finding a 3-piece suit dangling on his bedstead and a 3-day-old casserole deteriorating on the stove. Why, as a girlfriend, I didn’t see that as foreshadowing, I’ll never know. Sure! I’d love to marry you! and picking up after you for the rest of my life will be an honor.)

Actually, over and under the years of unmade beds and unfolded laundry, the scowling has relaxed into resignation-into-consideration-into-respect. He’s a man. And he’s one heck of a man. And since he’s descended from the fiercely independent and nomadic males of the past, he literally does not perceive “home” the way I do. So, whose fault, really, is it? this life of incessant straightening, sweeping, scrubbing and scowling?

The house, to me, is representative of who I am; it is fulfilling to see it clean and organized; decorated to my taste; lovely but livable. Our house is “home” to him also – he works hard to pay for it and takes pride in it and loves to fix broken things and wrestle with growing things –but it’s not all tied up in his very sense of self, like it is for me. His brain just does not see what I see (usually) — or cares as much when it does.

It qualified as a major revelation the day I realized I was the only one in the family who felt irritated by too-many-things-left-by-too-many-people-in-too-many-places (my kids were kids then).

I continued to “minister” to both husband and children despite their “unbelief” however, because I knew it was in their best interest (to divvy up the chores), but I stopped the preaching and gave up my whole holier-than-thou attitude. Life became just a little funner when I let my man be a man and appreciated his attempts — however imperfect by my standards — to load the dishwasher (without scraping first), to clean the bathroom (by dumping Comet into the toilet bowl), or to make the bed (decorative pillows backward).

Of course I know there are Felix Unger’s who are neater than their wives and Oscar Madison’s who refuse to do “women’s work”, but most nice guys are somewhere in the middle and feel a little bewildered by the expectations of overwhelmed working women and exhausted stay-at-home partners. An apron will probably never feel quite natural to him.

So, in the name of goodwill towards men, cut him some slack and not attack: laughter brightens a home better than Lysol.

Would you like your husband to help more with the everyday needs in your family and around the house?
What about offering you more emotional support?
Do you have a clue how approach him when he’s hurt your feelings?
Let me teach you how to do and get all of that (without pressuring, manipulating, or nagging!) in my popular video course:
How to Help Your Husband Help You 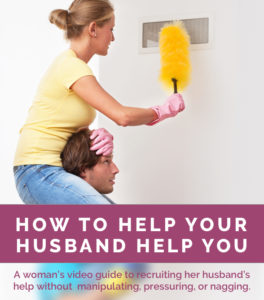