by Ramona Zabriskie | Dec 18, 2018 | Building a Partnership, Helping Him Find a Dream, Inspiring Him, Keeping the Magic, Leaving a Legacy, Understanding Men 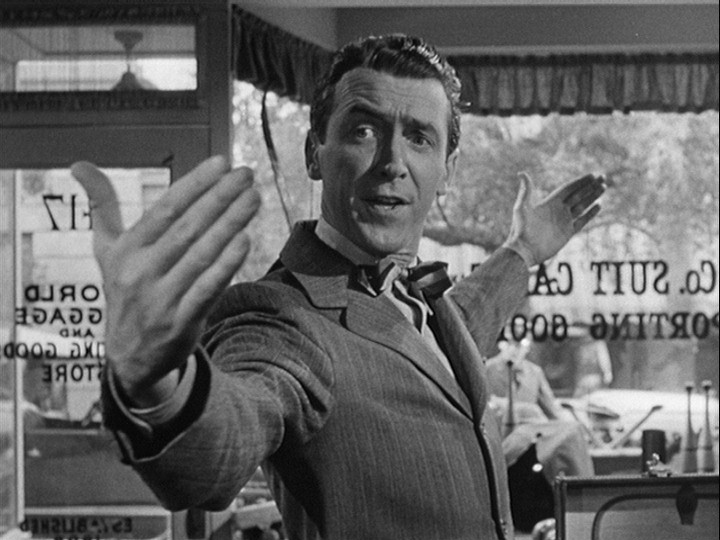 The fifth entry in my Classic Hollywood Christmas and Wife for Life: The Power to Succeed in Marriage series. As I’ve been saying, you can learn a lot from old movies. Not long ago, I used something (for the thousandth time) that I learned (a long time ago) from my favorite Hollywood Christmas movie…

Honey woke me (he didn’t mean to) at 4:00 a.m. while he moved around the room, gathering his things as quietly as possible. Yes, he was leaving me; flying away like millions of miles before. I used to get up and wave until his car was out of sight, but he finally convinced me to stay put. So now I just wait. When he’s ready to go, his knee comes up on the bed as he reaches across the covers and gently uncurls me. We kiss and whisper a prayer.

And then he’s gone.

And then I cry.

Accommodating Accomplishment is the hardest of The Wife for Life Laws of Attraction. I know it is for me. And I know it isn’t just me. Everywhere I go, everywhere I present, every time I mentor or talk with a woman about her marriage, it comes out. Loneliness. Longing. Sadness and sniffles.

“My husband is going to medical school and between classes, studying, and the gym, I hardly see him at all.”

“He’s already got one degree. Why does he need another one!?”

And my personal favorite…

“My husband has convinced himself that his becoming a Navy Seal is MY dream!”

After forty years and forty thousand good-byes, I think I understand a woman’s point of view…

But it doesn’t work that way.

As readers learn in Wife for Life, the male quest is at the heart of his why for both living and loving.

The male quest is so ubiquitous, it’s interwoven into every culture’s and every century’s stories: whether they be fables, folktales, true adventures, or Hollywood movies. And one of the best examples out there, other than Hercules and Odysseys, is one you are way more familiar with: George Bailey (aka Jimmy Stewart in Frank Capra’s 1946 classic, It’s a Wonderful Life).

George perfectly and realistically embodies the male orientation toward performance and accomplishment, and he shows us how that drive defines both he and his marriage. George’s ambitious nature — the drive toward exertion and conquest; the need to leave his mark on the world; his goal to have a work and to work it; his dream to wrestle and wrangle impossible stuff into logical goals—is at the heart of the story that is “George and Mary”…

Of course, George’s quest takes a number of twists and turns through the years…disruptions and detours galore… which ultimately tax his will to live, but his redemption eventually comes… not in the form of an angel named Clarence really, but in the form of another kind of angel…

George may be Mary’s hero, but Mary is mine.

George Bailey (as a boy): “I’m going exploring some day, you watch.”

Even from girlhood, Mary seems to understand, instinctively, that to cherish the man and not his quest is impossible. She knows in her womanly bones that to have confidence in the one, is to have faith in the other.

Well, I know that too of course—thanks to years of research, reflection, and Mary’s example—so I did my best that morning referred to at the beginning of this post, to muffle my sobs, put a patch on my heart, and go about my own work… which, by the way, was interrupted mid-day by this text:

Accommodating my husband’s deep-seated need for accomplishment these past 40 years has not been easy, but (as that texted conversation shows) it has been worth it. After decades of sacrifice and struggle on both our parts, not only is he at the top of his game, but I am at mine. Over and over, year after year, he has supported and facilitated my many (sometimes wacky) plans and dreams, all the while tirelessly pursuing his place in this world. In so doing he has made possible a life of love and good works for both of us –the way George does (in masculine style) for Mary and, of course, as Mary (in accommodating accomplishment), does for George.

Other posts in the Classic Hollywood Christmas series:

Would “Life” Have Been So “Wonderful” for George Without Mary?
Can Enemies Become Lovers? The Secret is in “The Shop Around the Corner”
It’s a Miracle: The Way Transforms Doris Can Transform Your Marriage
What Does Rosemary Clooney Learn About Men in “White Christmas”?

Leave a comment on this post to be entered in The Fourth Annual Wife for Life Classic Hollywood Christmas Giveaway! All thoughtful commenters on this blog between now and 11:59m PST December 31st, 2018, will be entered in a RANDOM.ORG drawing for one of FOUR Hollywood Christmas classics on DVD (including It’s a Wonderful Life) as well as an autographed copy of Wife for Life: The Power to Succeed in Marriage. Each comment (one per post please) will count as an entry. Come back and comment on all the Hollywood Christmas Classics blog posts (published Wednesdays in December) to better your chances!

Ramona Zabriskie, a wife of 41 years, is the multi-award winning author of Wife for Life: The Power to Succeed in Marriage and the celebrated marriage mentor and global educator of the 5-star WifeSavers Podcast, the WifeSavers Education Membership, and the acclaimed one-of-a-kind virtual school for women, Wife for Life University. Turn your marriage around in a thrilling way with her new free ebook, 5 Lies We Tell Brides and 5 Truths That Save Wives.
Share161
Tweet
Pin3
164 Shares